The improvements and additions to the Java language come as a result of the JDK Enhancement Proposal process.

The summary of this process is found on the OpenJDK project and interestingly enough the very first proposal describes the process.

In the summary section, it states:

This document defines a process for collecting, reviewing, sorting, and recording the results of proposals for enhancements to the JDK and for related efforts, such as process and infrastructure improvements.

An enhancement is singled out as:

An enhancement is an effort to design and implement a nontrivial change to the JDK code base or to do some other kind of work whose goals, progress, and result are worth communicating broadly.

While that is the very first proposal, the very very first one is actually JEP Zero. Who would’ve thought? This one contains an index to all the known JEPs.

A JDK Enhancement Proposal must include a summary and a description. It could also include goals, non-goals, success metrics, and motivation if applicable. All these are part of none other than the following JEP 2.

In my opinion, this process is very transparent to anyone interested in learning more about Java internal development and staying in the know about what’s about to come to the language. 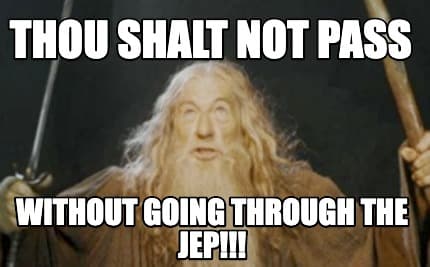